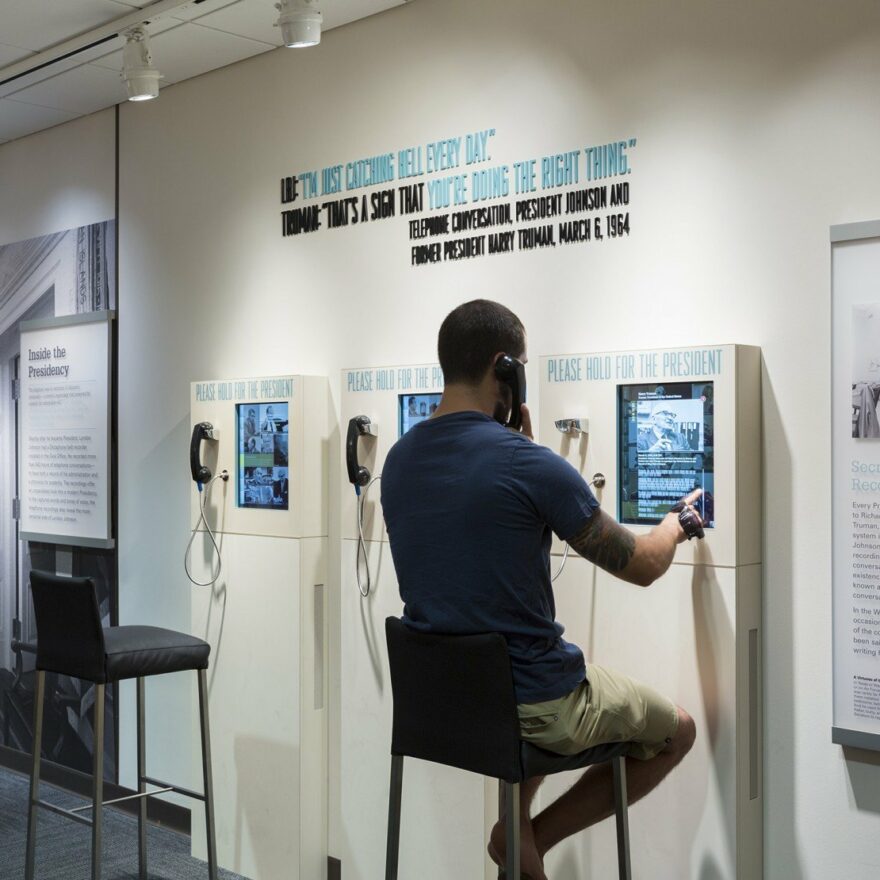 Author Julia Sweig spent over five years listening to the audio diaries of Claudia Alta “Lady Bird” Johnson, First Lady of the United States from 1963 to 1969. Featuring 123 hours of recordings, beginning eight days after the assassination of JFK, continuing all the way to January 31, 1969. These tapes offer a look into not only the emotional and intellectual intelligence of Lady Bird but also provide insight into the highs and lows of the Johnson’s time in the White House.

Due to our shared connection to the LBJ Library, we were able to sit down with Julia to discuss her research into Lady Bird, how her relationship with audio stories changed as she became more immersed in the diaries, and the ways that audio can be featured to draw in new audiences. For a more complete picture of the First Lady, Sweig’s recently published book Lady Bird Johnson: Hiding in Plain Sight is out now. Audiophiles can dive into her podcast here.

Lady Bird Johnson played a big role in her husband’s political career from the very beginning, including helping grow the Austin radio station they purchased into quite a successful media company. Given your relationship with not only podcasting more recently but with the 123 hours of tape that Lady Bird recorded during their time in the White House, what do you think would be her perspective on how audio storytelling has grown into such an approachable and robust public medium?

I think she’d be wildly enthusiastic about it. You know, I think of her as the original podcaster in the White House. The fact that she had the modern and forward-looking presence of mind to record her diary, to keep the tapes, as opposed to just written documents shows me that she was very much a person of this medium.

Do you think that’s because the Johnson administration was famously very telephone and recording technology-friendly? How much do you think that Lady Bird was influenced to record her own voice for documentation after observing the way in which her husband utilized his voice as such a practical tool during his presidency and did her background in journalism and history further inform that decision in some way?

I think it’s all of the above. I mean, first of all, long before she started with the audio recordings, she had a camera. She filmed on the campaign trail, going back to the late 1940s. Documenting her history and Lyndon’s political career and their co-mingled enterprise was definitely influenced by her training as a journalist.

As well as, of course, her eye on legacy, not just his legacy, but their legacy and her legacy. She thought of herself as a media executive with the radio station, and then the acquisition of the television station and gamble on VHF. She used Lyndon’s political clout to lock in certain exclusive airwaves in the state of Texas and keep competitors out. She was a media mogul in terms of her mindset.

We would have to check if LBJ had already installed his taping system by the time she had started her diary recordings, but, my suspicion is that she was possibly ahead of him as she was with so many other things. Yet, she wasn’t doing it secretly. He was doing it secretly. Her technology was not as advanced as his. But the choice to record and the choice of the medium, I think is part of a continuum of her media sensibilities that she had acquired going back to her schooling, and then her media business.

Speaking to her legacy for a minute, the word “beautification” gets tossed around a lot with Lady Bird, despite the fact that she didn’t actually like that descriptor. Regarding the environmental aspect of her interests, what do you think her opinion would be of museums and other experience-based institutions like the LBJ Library putting more of an emphasis on long-term sustainability?

She was starting to plan the library going back to 1965 and as soon as they were elected properly, she started researching the architect to bring on to the project while also figuring out how they were going to staff it.

Very specifically, Lady Bird was thinking about what were ways to capture a visitor’s attention via storytelling. I think she would be kind of mesmerized by the multimedia approach that’s taken hold in the museum exhibit world. She was really allergic to anything boring and she had that experience of museum fatigue herself sometimes. But, she went to a lot of museums and was thinking a lot about how to tell their stories. I think she’d probably be pretty keen on the way it’s been done.

You mentioned that she started recording eight days after the JFK assassination, all the way to January 31, 1969. In all that time and given everything that she and Lyndon went through, did anything surprise you as you were listening to her document these moments?

Well, there’s so much that’s surprising in there. There are some stories that she tells that I’d never seen told by any of the other LBJ historians. But then because her public image was sort of two-dimensional, I was surprised, for example, that she’s quite open about her own emotions around the embattled presidency and trying to keep LBJ standing on two feet.

Also, there was a shift in her identity. She comes into the White House thinking of herself as a progressive, especially on civil rights and Great Society issues. But, as the political upheaval in the city in American cities strengthen and as the anti-war protest grows more intensely, she starts to feel like an establishment conservative. It’s very confusing to her that there’s such pushback when she and LBJ thought of themselves as reformers, progressives, and idealists.

Many people, yourself included, have said that Lyndon Johnson had an incredible eye for talent, a skill that may have served him well when he proposed to Lady Bird on their very first date. But their partnership changed and matured in many ways throughout the years. How did your relationship to the audio recordings and more specifically Lady Bird herself change as you got more and more immersed in this project?

I haven’t been asked that question before but I’ve been thinking about it a lot. When I wrote the book, I went through the process of reading all of the transcripts. Then when I knew that I wanted to quote from a transcript, I would go and listen to it so that I could hear how she sounded and try to characterize how she sounded. I wanted to capture her mood at that moment.

After the book when we switched to focus on the audio project, I listened to hours and hours of her and it actually deepened my understanding of her tremendously. She has a lot of clarity about the way she speaks, her moods shift within a matter of sentences or paragraphs, especially when she’s talking about the big political tragic moments. She’s extremely revealing and listening to the totality of her audio made me understand her even more than I thought was possible.

Could you say that you started this project with one set of assumptions and then by the time you finished it, your assumptions had changed?

I wouldn’t say that. However, I did start with one set of assumptions and those were that she was this extremely important influence in the White House, while also being a very brilliant person. She figured out her place while knowing how to navigate to the appropriate spaces.

I just got to know her infinitely better than I thought was possible by having to go back and actually listen to all the audio.

That parallels with how many podcast listeners now consider themselves to be friends or really knowledgeable of the people in their ears, despite the fact that they’ve never met them in real life. There is an intimacy to that medium that I do not think is matched by other types of media.

Yes, intimacy is definitely the right word. I love the fact that she was game to be that intimate even though this was a document meant for public consumption. It is not a private diary, it is a document that is about her story, her legacy, and their presidency. Even within those constraints, I think she really does let one in a lot.

You spent over five years writing about Lady Bird, which is just about as long as the duration of the Johnson administration. Were you aware of how long this project was going to take you when you began? Were there particular hurdles that extended the process? Alternatively, did the five-year process move more quickly than you thought it would?

Faster? No. It actually took longer than five years if you count back to reading the published diaries and reading all of the secondary literature required to do the research for the book proposal. Full-time reporting and then writing, it is about five years, and I loved that it was that length of time.

I think given the amount of time you dedicated to listening to the tapes you can speak to this with some authority now, what are ways that museums and institutions can elevate the audio artifacts or stories they have in their collections in compelling ways to attract not only more people like you with a specific focus but also general audiences that have less of an academic focus?

When I started this project, I did not go into it thinking that I was going to take the audio, wind up with this multimedia outcome of both the book and the audio documentary. That idea came up in the last year and a half. I began before it was the explosion of podcasts. Now that we finished that part of the project I know that we did find new audiences with the podcast, without a doubt. A big thread on the comments is how people had no idea this story existed. These are people that do not consider themselves to be very into historical stories but are now excited by their experience with the medium.

That is driving me to think about my own audio future, my own production possibilities, and the topics that I might want to be involved with, either as a host or a producer. Museums and archives are the first places that I want to start mining for archival material. The thing that is unique about Lady Bird Johnson in this whole project is that there was all this unexcavated audio material. The library, as I recall, had her one entry, her first entry, but not more than that, partially because these institutions have to make a myriad of curatorial decisions on an annual basis.

I think that there is a huge opportunity for public institutions to use their audio to grow accessibility and to reach new audiences. Will these institutions, for example, decide to have in-house audio teams that produce material? There have always been guided tours, but that is a different experience. People say that they would not listen to this kind of thing, but we now know that is not the case, we can continue to expand the audiences if we take the right approach.