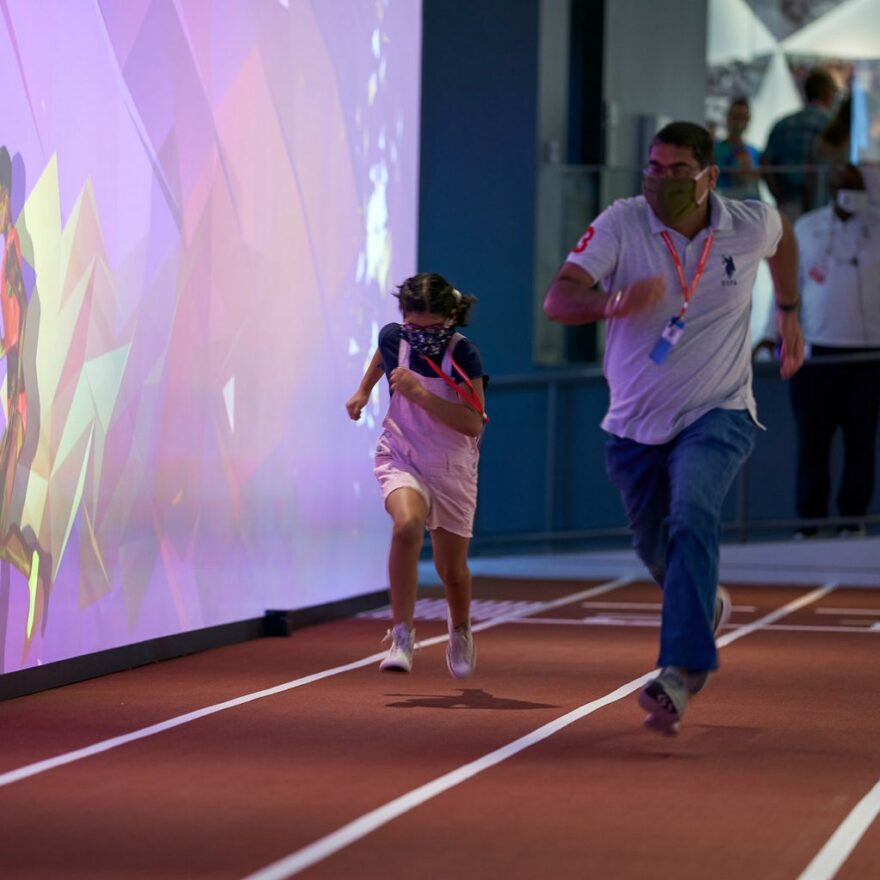 A Journey to Excellence: Creative Vision for USOPM

While positioned as a global stage, the Olympics have provided a context for outstanding achievements for the United States and athletes at both the Olympic and Paralympic games. Those achievements needed to be celebrated and presented to audiences to preserve the legacies and stories of the athletes responsible. The 60,000-square-foot U.S. Olympic & Paralympic Museum (USOPM) in Colorado Springs, Colorado, does just that.

Already recognized by The New York Times, Smithsonian Magazine, and Architectural Digest, The USOPM will be known as one of the foremost institutions practicing and extolling the virtues of accessible physical and interactive design.

The gallery spaces, designed by G&A with the intent of blending immersive storytelling with architecture that matches the fluidity of Olympians in competition, work to present a captivating narrative that flows for the entirety of the visitor experience. The building, conceived by architects Diller Scofidio + Renfro, is inspired by the performative energy and grace of Olympic athletes.

This meaningful experience will forever transform how people perceive and appreciate what it takes to become an Olympic and Paralympic athlete. At the heart of the journey, are the personal stories of Team USA athletes—their lifelong dedication, motivation, determination, and sacrifice to compete at the highest level.

The team envisioned a museum that elevates the standards for accessibility and inclusivity—no matter their physical and mental ability. To do this successfully required the highest level of collaboration between the design, fabrication, media, and interactive developers.

Via a creative process rooted in iteration and testing, solutions were developed out of, rapid prototyping, and diverse user testing groups. Along the way, the development team invited Olympic and Paralympic athletes to test interactives at each phase of the process. The insight gained from these efforts allowed our team and partners to achieve a new benchmark for accessibility through the use of universal design.

“We wanted to make this the most accessible Museum in the country—maybe even the whole of North America. Creating a truly inclusive environment became a major driving force in every design decision we made,” notes Carl Rhodes, G&A Exhibit Design Director.

Upon entering the space, visitors are greeted by a 40-ft tall LED display looping footage, which sets the tone for the level of athletic performance that will be presented throughout the galleries. Anticipation builds as an elevator lifts them to the atrium’s “peak” where they glance across the Colorado landscape to Pike’s Peak in the distance—it’s a poetic nod to “America’s Mount Olympus.”

The experiential journey peaks at one of the most significant moments in an athlete’s journey: The Parade of Nations. Visitors enter a tunnel mimicking the compression, anticipation, intensity, and excitement athletes feel as their destiny is realized. Cheers from the crowd heard in the background, anticipation builds as the stadium emerges on the other side. Inside, a visual spectacle of the Opening Ceremonies immerses visitors in a 360-degree filmic celebration.

Going from Summer Games to Winter Games, visitors become spectators in the sports, the artifacts, the moments, and the personal stories of athletes, their families, and their coaches. Then traveling through The World Watches, seeing Olympic-inspired pop culture, coming face-to-face with virtual Olympic and Paralympic athletes, and understanding how the Olympics are woven into the national and international events and politics.

Ending their journey at the Medal Ceremony—an immersive, interactive media environment—visitors witness the conclusion of the athlete’s journey. They feel the emotional impact and the acknowledgment felt by athletes after a lifetime of dedication and training. And they leave with a better understanding of how much The Games have inspired our culture and communities and connected us all through the universal language of competition.

In The Lab, visitors inspect the technical advancements behind both Olympic & Paralympic achievements. From Michael Johnson’s iconic gold running shoes to Amanda McGrory’s racing wheelchair, a set of running blades, key artifacts are placed behind transparent OLED screens, turning each item into an interactive exploration.

We are deeply honored to be part of an incredibly talented team of consultants that came together to vision—and ultimately create—one of the most important new museums on the international landscape.
Patrick Gallagher

A Point of Pride

While this has been a challenging moment for the entire Olympic community, the Museum allows us to collectively remember how important the Games are. This Museum will reinforce the feelings of excitement, drama, and, most importantly, pride for the Olympics and Paralympics to audiences both foreign and domestic. This experience connects us to our identity as athletes, as a nation, and as a people.